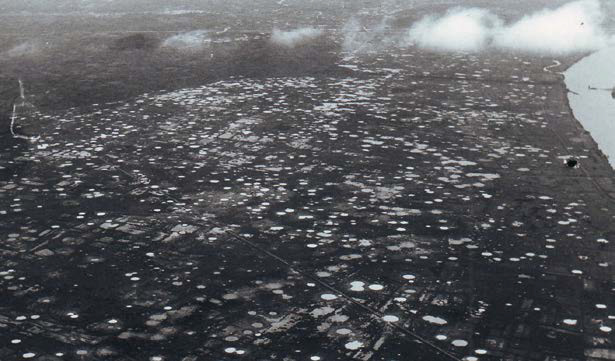 The Most Bombed Place on Earth

American aircraft dropped over 5 million tons of bombs on Vietnam– the largest bombardment of any country in history– and more than twice as much tonnage as the U.S. Air Force dropped in all of World War II. Over 4 million tons fell on the mostly rural areas of the former South Vietnam, plus 400,000 tons of napalm and 19 million gallons of herbicides. This compares with approximately 2 million tons on Laos and half a million tons on Cambodia.

Renew’s area of operations, Quang Tri Province, is about 43 miles square– smaller than the State of Delaware– with a population of rural farmers and two small towns. Yet it was pummelled by the most intensive aerial bombing of the Vietnam War– including widespread carpet bombing by B-52 bombers– making it by far the most bombed province in Vietnam. Besides the 750- and 500-pound bombs delivered by aircraft, many of which remain in the ground unexploded, Quang Tri suffered intense land battles that left the surface littered with a seemingly limitless number of every type of bomb used in ground combat, from cluster bomblets and artillery shells to hand grenades, rockets, mortar rounds and mines. Together they make Quang Tri the most bombed place on earth.

As one academic study put it, “Quang Tri province was basically bombed flat during the war, with most of its capital and infrastructure destroyed: only 11 of 3,500 Quang Tri villages were left unbombed by the end of the war.”

Quang Tri’s position on the border of the former North and South Vietnam, the DMZ, made it a major battleground. In 1966-67, U.S. forces set up firebases along the border — at Camp Carroll, Con Thien, Gio Linh, Cam Lo, Dong Ha and The Rockpile — which became the focus of large ground battles with the North Vietnamese Army (NVA) for control of the border and northern Quang Tri. Best known of these battles is the multi-division siege by the NVA of the U.S. Marine base at Khe Sanh in western Quang Tri in the spring of 1968. Here American B-52s pulverized five square miles around the base with 100,000 tons of bombs – probably the heaviest single bombing in the history of warfare. These giant planes, each carrying up to 108 bombs totalling 60,000 pounds, would attack in large groups that destroyed everything in a “box” over a mile long and a half mile wide.

Intensive shelling and bombing took place across the province during U.S. Marine and Army operations in 1966-68; Quang Tri City was overrun by the NVA and recaptured by southern forces in April 1967 and in the Tet Offensive in January 1968. The most destructive event was the 1972 Easter Offensive, when three reinforced NVA divisions attacked South Vietnamese positions in Quang Tri from the north and west. After bitter fighting by thousands of troops on both sides, the NVA captured the town of Dong Ha, Quang Tri City and the rest of the province in April. In late June the South Vietnamese launched a two-division counterattack, aided by intensive bombing by B-52s and other attack aircraft, which retook Quang Tri City in September amidst house to house fighting and heavy artillery barrages from both sides. Cluster bombs were in widespread use by U.S. forces to support troops on the ground, and B-52s flew strikes against entrenched NVA troops even in the city itself. One source estimated that in July the U.S. flew 5,461 attack aircraft sorties, 2,054 B-52 strikes and operated five aircraft carriers in support of the counteroffensive. During this massive battle, much of the province, including Dong Ha and Quang Tri City, was destroyed.

Craig Whitney of the New York Times reported on September 29, 1972 that Quang Tri City, formerly a town of 35,000 people, “was an unrecognizable wasteland of smashed buildings and craters” as a result of American bombing and North Vietnamese shelling. Inside the old Citadel there was “nothing— not one tree, no building, not even a bunker—is left standing. Outside, stretching east, west, and south as far as the town once did, there is nothing but rubble, bomb craters and shredded trees.” South Vietnamese marines put flags on broken telephone poles “because almost nothing else stands higher than a man in Quang Tri City now.”

One study found that the average number of bombs and rockets dropped on a district in Vietnam during the war was 32 per square kilometer and that the worst districts had over 500. The district containing Quang Tri City received 3,148 per square kilometer, and the rest of the province was by far the most heavily bombed in the country.

This history is still lying in the soil of Quang Tri. Not just the large bombs, but also many thousands of cluster bomblets, artillery shells, rockets, grenades, mortar rounds and mines are scattered over the landscape. Although many of the large bombs are deep, most of these smaller infantry weapons lie near the surface, often becoming visible when the rains wash the soil away. They appear in the beaten earth of school playgrounds, in gardens, under houses, in village ponds and in rice paddies and forestry,* the deadly legacy of those long- ago battles that we must remove to make Vietnam safe.

*On a recent visit, we met the principal of a local school built after the war who had found cluster bomblets—still live and deadly—emerging from the ground as she swept her school playground. A subsequent search found more unexploded ordnance nearby.

Responding to this challenge, over the last 20 years RENEW and its international partners have made great strides in reducing the risk of injury from unexploded ordnance (EO). While years of work lie ahead to effectively clear the province of EO and release land for cultivation and other uses, RENEW’s combination of effective risk education with targeted effort by clearance teams has resulted in a steep decline in injuries from EO in Quant Tri – and zero injuries for the three years 2018-20 and thus far this year.